A painter who links the term ‘sound’ tot paintings walks on thin ice Hugo Van Goethem duly realizes. The series of paintings which the artist catalogues as SOUNDS is generally inspired by music and noise, but this does not mean that painting itself occurs during the music. Hugo Van Goethem does not want to paint states of min. It is never his intention to throw himself at the canvas like an action painter. What fascinates him is movement. What more is a sound than a movement or noise in space? The artist wants to see the phenomenon physically transposed to the canvas. 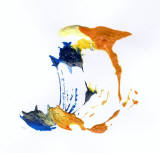 To that end he develops an entirely original musical notation. In this semiotic play, the paint and the way it is applied acquire an essential role. Thus high pitch will be reflected in cold or primary colours, while for a low-pitched tone he rather chooses warm ones such as earth colours. The penetration sound of a trompet for example the artist associates with the primary colour yellow, but not because of copper, the material the instrument is made of, is of yellow colour, as for the deep tone of the bass tuba, manufactured from the same material, he will rather choose yellow ochre. The majority of sounds is complex however: if for example one strikes the note of a piano, one hears the muffled noise of the finger as well; in the case of an orchestra, the sounds come on from all sides. 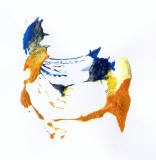 In order to be able to reflect the movements of sounds, Hugo Van Goethem predetermines the colours from which to start. The canvas becomes the score in which the spectator sees a series of sounds being born. sees them inflating in space or dying suddenly. To enhance the movement of sounds in space, Hugo Van Goethem presents paintings in series. The presentation of a series is not a static fact. In the artist’s opinion the series could extend interminably; it is limited only by his own decision. Besides it leaves the spectator also the freedom to observe each series and each frame within a series from any side. The artist presents just a musical notation and leaves to the spectator the interpretation of the sounds painted. If he is prepared to read the artist’s ‘compositions’, the paintings start to resonate irresistibly.

Click here to open a gallerie with some works.