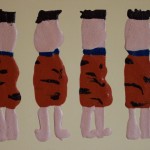 In the series CARTOONS, Hugo Van Goethem surprises innumerable well-known icons in a space outside the cartoons. He removes the figures from their characteristic framings, strips them fo their typical features and increases their value as icons by the single use of essential, often primary colours. By stripping these figures, reducing them to their essence and profiting from the striking texture of the paint they obtain something moving, one could almost say ‘human’.

In these paintings the artist aims at filling the gap which the figures jump between two drawings. What does our brain do if we look from one frame to another? It blindly reads the story from the images which proceed in the imaginary space between two frames. This film – in which the draughtsman consciously leaves the control with the spectator by not drawing the images – takes form in paint on Hugo Van Goethem’s canvases. The artist also turns the figures’ movement into a plastic suggestion: the movement is put quite literally in the painting, he manipulates the matter on the canvas until the characters seem to move on it. In certain paintings he already does so while the painting is still wet in order to obtain a maximum oscillation. 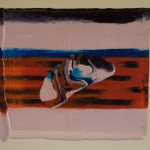 These works the artist considers a synthesis of the SOUNDS and the LANDSCAPES. As in a musical score he repeats figures, juxtaposes them, smears them on the canvas so they morph to a landscape. It is the most playful part in the work of Hugo Van Goethem. As an artist, he seems to enjoy the infinite possibilies the world of the cartoon offers him. However these works never downgrade to a simple guessing game. The figures are only a means to the artis, not a goal. These works also surprise – without our being able to guess which character the artist represented – by their treatment of paint, their composition an their animated movement.